Where Distribution Ends and Promotion Begins

Why Not Every Author Agrees that Promotion Does
the Trick

The Confusion between Distribution and Promotion

Traditional publishers, particularly the big ones, long ago developed the practice of both distributing and promoting the book they are going to publish. Unfortunately, in the much newer print-on-demand self-publishing industry, there are authors who believe that author services firms do the same thing. Also, some companies catering to self-publishing authors fail to enlighten them about the difference between distributing the book and promoting it.

The gist is that “distribution” in publishing refers to the process of making a book/title available in the market through booksellers (i.e. Amazon, Barnes & Noble, etc.). “Promotion,” on the other hand, focuses on making the public aware of the book’s presence in the market and creating a demand through effective—and sometimes aggressive—marketing strategies that further increase the book’s chances to be sold..

Although completely different, distribution and promotion are often thought of together as either one and the same or two parts of one package—with distribution also comes promotion. The truth, however, is they are completely separate entities, albeit closely related. Unfortunately, some author services firms take advantage of authors who make this erroneous assumption. Distribution on its own rarely sells books.

Distribution and promotion are the final leg of a book’s journey. Although neither gives a 100% guarantee that your book can reach its supposed destination—the readers—both are aimed to bring the book closer to its target audience.

Distribution can only go as far as booksellers; promotion, on the other hand, takes things further by increasing the chance of your book to reach the hands of the readers. When the goal is for the book to sell, distributing it is not enough. Stopping at distribution will only make you rely on the chance for a potential reader/buyer to take notice of your book and hopefully purchase it. But when your book is unknown and sits among the thousands or millions of others having titles, authors, or publishers that are more recognized, the chance for your book to be noticed, much less bought, is very slim—and this is where promotion plays a very important role.

Book Promotion—Is It Worth It or Worthless?

Although book promotion is a norm and believed to be an effective method of getting your book known, therefore boosting its sales, there are still some who believe otherwise. Bestselling author Kristine Kathryn Rusch stated her reasons why and how spending time promoting your book is not a time well-spent in “The Business Rusch: Hurry Up. Wait,” an article she posted on her blog. According to Rusch:

“Publicity doesn’t work for books. It really doesn’t. All it does is get your name in front of a reader who might then glance at your book. Or not.”

And for the independent authors, here is what Rusch had to say:

Rusch’s view on book promotion, however, was strongly refuted by Lori Culwell, author of How to Market a Book, in “This Week in Publishing, and My Challenge to Kristine Kathryn Rusch,” on her own blog post. According to Culwell:

“In the context of ‘first time, no one knows about you, self-published author,’ Rusch’s post is so wrong it scares me. I know from first-hand experience that this is wrong, and so I am going to try to use this post to implore the author to reconsider her statements and to please give her readership some actual useful advice and at least encourage them to use HER as an example. She blogs, and is on Twitter and Facebook, and so is clearly not taking her own advice and just moving on and writing other works.”

To justify her own claim, Culwell shared her own experience as a self-published author:

“In 2006, I actually did follow Rusch’s advice. I wrote a novel, and waited, and played by the rules, and after a year, it was painfully obvious that unless I told someone about my work, NO ONE WOULD EVER KNOW ABOUT IT, and I felt sad all the time because I had put so much work into something that clearly no one was ever going to see.”

Rusch’s blog post illustrates the path of an author whose publishing journey stops at the distribution process; nothing follows. Culwell’s post, on the other hand, justifies her point on why continuing to promotion begets exposure, which begets more possible sales.

In a Forbes article by author Suw Charman-Anderson (“Valuable Lessons from a Self-Publishing Survey”), she cites some highlights of a Taleist survey on more than 1000 self-published authors. First, the survey results show that authors who get help in editing, proofreading, cover design, and even e- book formatting earn more sales compared to other authors who did everything on their own. In fact, those authors seeking professional help in all three of these areas earned 34% more than the average self-published author, while those who sought no help in these three areas earned only 38% of the average (and barely more than a quarter of those who sought help in all three areas). 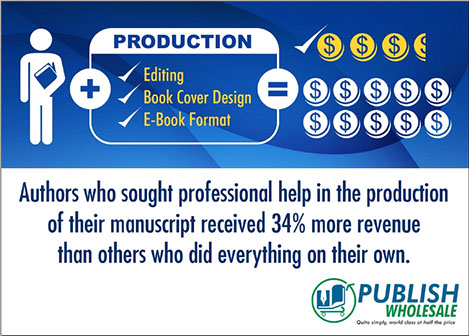 The Taleist survey also reveals that authors who have invested in outside help for both production and promotion of their books experienced increase in their sales revenue, with higher possibility of recouping their investment, maximizing revenue, and making a living off royalties (the average revenue per year in royalties from book sales is $10,000, but the median is only $629). Ten percent of self-publishing authors receive 75% of the revenue, thus making them the survey’s top earners, or the ones who make a living exclusively from book royalties, which became even more possible after investing in outside help for the production and promotion of their books.

Although the top earners are much more likely to get outside paid help on both production and promotion, they are targeted and more persistent with marketing their titles. According to the Taleist survey for instance, book sales revenue is 55% higher for those who produce a video book trailer. Further, persisting for more than twelve months with promotional efforts—social media, unpaid reviews, e-mails, blogs—is associated with sales success as momentum for book sales builds over a long period of time. Establishing relationships with readers through social media is among the top three self-reported reasons for higher sales among the top earners. 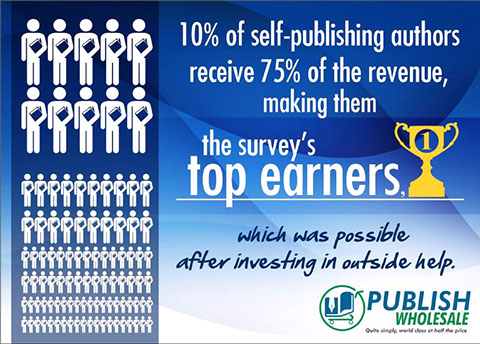 So, is book promotion really a must? Or is it something an author can forego and focus on writing more books instead? In another Forbes article—“Book Promotion For Self-Publishers: A Waste of Time?”—Suw Charman-Anderson presents the pros and cons of Rusch’s claim and arrives at a middle ground, noting the importance of finding the balance between writing follow up titles and promoting your most recently published ones.

“Rusch has a very strong point that one of the best things that an author can do is carry on writing and get more books finished and put up for sale…. She [Rusch] is also right … that it can be impossible to predict how a book will sell, when it will take off, and in which territories. There is undoubtedly an element of chance involved….

All this seems to say that success is a matter of luck and is outside of the author’s control. That’s an attractive hypothesis because it takes the onus completely off the author, but it’s not completely true. What does make a difference to sales, especially for first-timers, is getting good reviews in online bookstores…. The only way to break this cycle is to get reviews, and that means promoting your book.”

“Doing lots of promotion isn’t a guarantee, of course…. But what is a guarantee is that promotion has an opportunity cost…. You need a balance between time spent promoting your released book(s) and time spent writing the next. Set aside a little time each week for key promotional activities, keep an eye on what works and what doesn’t, but … keep writing.”

While there are authors like Rusch whose view on book promotions, according to Charman-Anderson, “flies in the face of the accepted wisdom that authors who want to succeed, however they are published, must be willing to do at least some of their own promotion,” the Taleist survey clearly indicates that if a self-published author aspires to be one of those 10% that are the top earners, the probability they will succeed lies both in the continued writing of more and more books, and the persistent production of targeted promotion. The odds of that kind of success when the journey stops at distribution are shown to be statistically far lower.

Gaining exposure for your book, however, might cost more than you can afford. But according to book marketing expert, Linda Leon, “Marketing can be expensive, but you have to start somewhere, and (even) if you can start…with those free resources and then build until you can gain a budget to do professional marketing, then that’s what you need to do.”

In her video tutorial titled “Inexpensive Marketing Tips,” Leon provides various ways an author can market his or her book without spending too much or nothing at all.

Publish Wholesale is the author services daughter company of the largest independent book production and promotion firm in the world. We look forward to providing you with more information about targeted book promotion that ‘fits the data,’ production that pays for itself, plus articles and Linda Leon’s expert videos on the science of book promotion.