The Art and Science of Book Promotion

An author writes. That is what he or she wants to do. And in most cases, an author dreams—bestsellers, making a living from writing, and seeing his or her book adapted into a movie or television series. These are all good—in fact, they are all great. Dreaming, hoping, fantasizing about ultimate success in one’s own writing is a virtue. However, writing is hard, and writing really well is harder—it takes motivation, persistence, and continuous improvement.

For independent authors, the entire self-publishing journey is a three-stage adventure as described in Not a Gold Rush: The Taleist Self-Publishing Survey:

“Writing a book is the first leg…getting it self-published is the second. The third leg is marketing your book.”

The writing process is what every author understands and completely relates to. The publishing process is, to a lesser extent, also a familiar setting for authors, especially the experienced ones. However, after a book is finished and published, the next phase of getting the book known and making it sell is usually like stepping into an entirely different world. It’s a hard adjustment to make for most, but the fact is that promoting one’s book is akin to operating a small business; it has very little to do with writing or the publishing process. An author who realizes, accepts, and adjusts to this reality has already taken the first step.

Proper book promotion is something that a lot of authors don’t do. These are the authors who try to find experts willing to put their energies to promote books. Agents do this. Traditional publishers do this. They become that second personality, that small “business mind.” In doing so, these business pros confine the authors to the only world they know—writing, dreaming, and hoping—while the agents or publishers get the lion’s share of the profits from small businesses that can actually belong to the authors, if they only know how to handle it and handle it well.

Even in this case, when the agents or publishers are generally more involved, the authors are still asked to step in and participate in the business quite often. The primary responsibility for the alter ego rests on somebody else, yes, but so does the profit. Less than 5%—by some measures, less than 1%—of authors find an agent or traditional publisher willing to take them. For the other 95–99%, however, the authors are going to have to be two different personalities: a writer and a small business owner.

The characteristics of running a start-up small business

The most important thing you need to know is that running a business has its own skill set needed, just like anything else. The most common problem among people who try to start a business is they may think that if they are good at what they already know, they’ll succeed. Someone good at working on cars starts to charge people. Word gets around, and he works on more and more cars. Eventually, the fateful day comes when he starts to hire people to help him. He is confident about his knowledge and experience as a car mechanic and believes that it’s good enough to take things to the next level based on that skill alone. But he is about to embark on a venture on which he knows nothing—making a business work. He is about to find out that technical and management skills have little to do with each other.

The same thing goes with marketing your books. Although a fair amount of book promotion is writing—blogs, articles, social media postings, press releases, etc.—this is just about 20% of it. You’ll want to concentrate on that, and that’s a good thing. But what is essential is that you accept and make it your mission to learn as much about the other 80% as you can, as well as spend enough time on that. If you do that, you’ve got a shot. You say to yourself, “Someone else can do all that. I don’t want to think about that.” If you’ve chosen to do that, you’ve lost before you have even started, unless you get an agent or a traditional publisher. 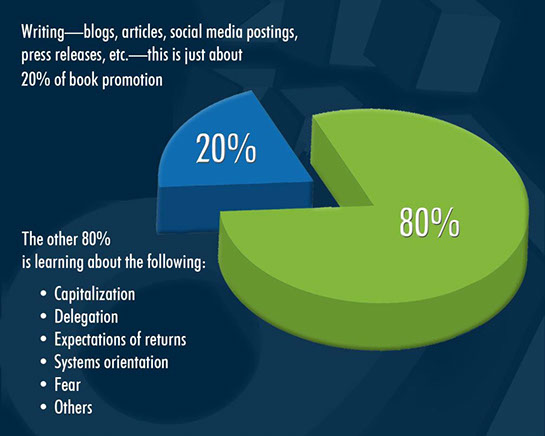 This is not to say you have to be an expert in all parts of book promotion; it is, however, important to say that you need to understand all parts of your new business well enough to oversee it. Best-selling self-published author Hugh Howey mentioned this in his article, “Hugh Howey: Self-publishing is the future—and great for writers”:

“The success of your work will depend on you knowing this business and embracing all the challenges that a self-published author faces…. Promotion will be up to you.”

We all start from somewhere—or with something—and it is always preferable and more effective to understand the basics first instead of trying to take in the whole all at once. Before you start with—or overhaul—your book promotion business, there are first five tools you have to get to know and familiarize with:

If you avoid the biggest land mines, you have a chance at success. If you emulate those that have succeeded before you and truly make your best effort at doing that, you have an even greater chance of succeeding.

In this series of articles, we are going to show you the biggest land mines and tell you what has worked best. Please notice that we will periodically describe a behavior, an attribute, or a pattern of decision that: (1) defines a bigger reason why authors fail or (2) defines something that successful self-publishing authors making an independent living from royalties are doing. Our suggestion is that when you see those, keep track and make a list of common behaviors among authors who fail or among authors who became top earners. We suggest that you refer to this list regularly and make sure you’re always avoiding the fail behaviors while emulating the ways that led to success. Most authors—in fact, most people—will tell themselves, “This doesn’t apply to me,” in this or that circumstance. They will go off on their own adventure, ignoring both lists, and end up looking around for whom to blame when they fail. It is your job and your responsibility to not be one of those people.

It is important to strongly consider capitalization before you start your book promotion business or any business for that matter. There are ways to properly prepare and reduce the capitalization needed. 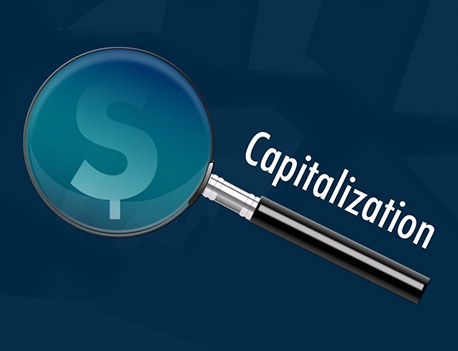 Most self-publishing authors make one or two mistakes right out of the gate. First, some do their book production themselves. According to the Taleist survey for self-publishing authors, respondents who used paid professionals to do their production work—cover designs, page design, ebook, etc.— earn 3.5 times as much royalty/revenue compared to authors who did that work on their own. Second, some authors who decide to hire an outside firm to do production work tend to show poor judgment in their selection of firms. There are those who would spend $3000, only to get sub par production work done when they can get high-level prepress for one-third of that cost. With the former mistake, they enter into book production already having sabotaged themselves out of two-thirds of the returns they might get for promotion. With the latter mistake, they enter promotion $2000 poorer with what may or may not be an attractive product, which further decreases the chance of the book to sell.

Capitalization planning depends on a realistic idea of the amount of time it will take for promotion to succeed to a break-even point. Most authors—in fact, most first-time small business owners—vastly underestimate this amount of time. With most small businesses, it takes three to five years to get to break even. While the amount of time it may take to get to break even with book production is less than that, most authors—and most small business owners—give up after three to six months of effort. If you want to make it into that segment of the top earners—self-publishing authors who reported making a living off their royalty income (10% of self-publishing author respondents)—you should capitalize so that you can maintain your plan for at least 18 months, a probable time frame to reach break even point. There are authors who accomplished this within 12 months, but very few in a shorter period of time.

Capitalization is one part of the picture we are trying to put together. And like the rest of the foundations we are going to discuss, it also branches out and affects other aspects and eventually the whole venture. But in order to understand the basics and the whole small-business-start-up subject, we will start with the overviews before narrowing down into more details, during which we will introduce more important facets of book promotions from the business perspective.

On the next article, we will tackle techniques on proper and effective delegation of tasks, knowing when and where to ask help, as well as what your focus should be in the start-up process.

Publish Wholesale is a publishing services firm dedicated to help independent authors by not only offering publishing and promotion services, but also by providing them with significant information about self-publishing and publishing industry in general.

Publish Wholesale is currently ranked #1 in North America for author client satisfaction and enjoys the status of being the lowest priced provider of any quality author services firms worldwide.
Increase your book’s chances to sell through Publish Wholesale’s promotional packages.
Publish Wholesale helps maximize your book’s potential through quality publishing services.
Service cost is a vital part of publishing and promoting your book; we try to make the decision-making easier offering high quality services at prices lower than most.